MADE IN NIRVANA
Chapter 33
Together 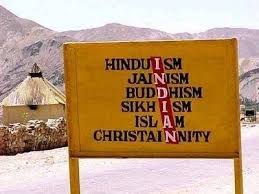 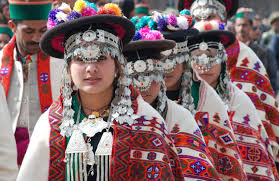 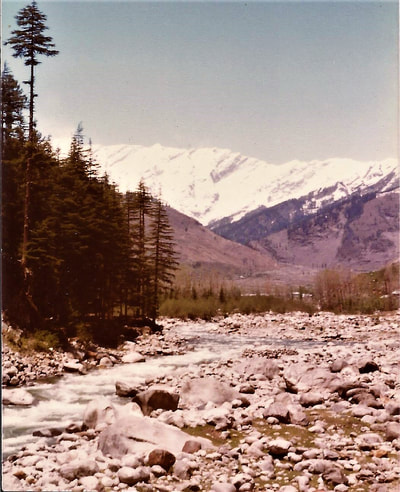 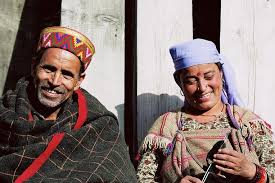 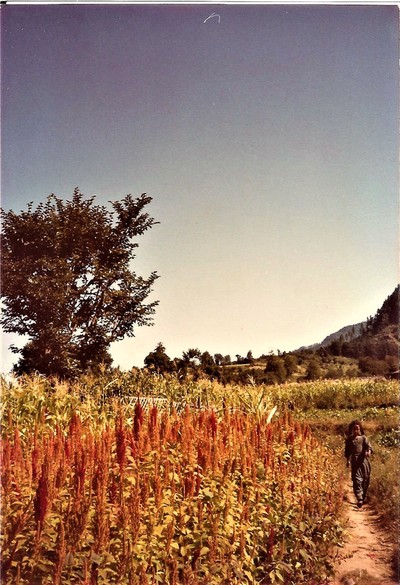 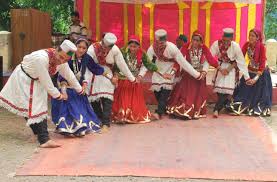 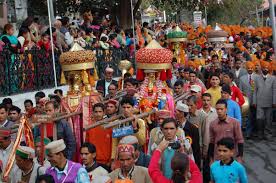 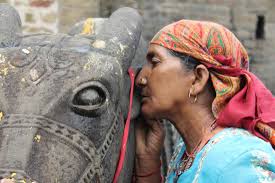 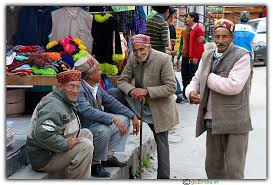 The afternoon sun flooded the covered balcony while the green river in the valley below muffled all noises with the sound of its rush. With uncertain steps, the little child walked toward Maria. She helped him with the last two steps and sat him on her crossed legs. Ashok was very fond of her and she knew he loved it when she scratched his small back. At the Post Office she had found a letter from Ester, which she was now going to read in peace. The child relaxed under the touch of her hand, while she massaged him slowly, absent-mindedly.

"Dear Maria,
By the time you read this letter you'll be back in those mountains while here autumn is approaching. I'm sure you'll be happy there; I know how much you adore that place and its people. A lot of things have happened since you left that I think you'll be interested to know. Franca: since she was repatriated, and after your visit, hardly anyone has seen her. Even Gabriele has little contact with her. He says she doesn't want to see her old friends because we are 'bad people'. No comment! But the most surprising thing for those who know her is that she's got a job outside of Venice. Her father bought her a car and she drives to work every day. The first problem is that she is a Venetian through and through, going back many generations, and drives like one, accustomed to boats and canals rather than roads. The second is that she's not herself any more. The one time I saw her, at first she didn't know who I was. She looked at me for a long while, then she suddenly recognized me and remembered our quarrel. After that she kept her distance, which is fine by me. Her reflexes have visibly slowed down. People ask her a question and she doesn't react, but then, ten minutes later, while they're talking about something else, she suddenly replies to what they had asked her earlier on. She has had at least two road accidents, quite serious, where she hit a couple of people; apparently she hadn't seen them. I don't know what has happened to her, but it's something radical; her personality is unrecognizable. She's gone back to living with her parents. Ironic, to say the least!
I don't know if you are interested in hearing about Ugo. He bought a share of a friend's shop, they sell sports equipment, and he's working hard. He says he has no time to play guitar, much less the violin. He asked me about you and I told him you're happy. He doesn't let on what he thinks and doesn't say anything, but I have the distinct feeling that your decision to get married took him by surprise, and that he would have liked another chance.
The kitten has grown, he's now a big cat and makes us laugh a lot. I popped into the Art Gallery the other day and they told me they have sold almost all your paintings. I bet you like to paint in those mountains. I want to come and see you, with Enrico of course. Hopefully we can come in the spring for a couple of weeks; I'm already saving the money. I miss you very much. Write soon!
Big hugs to you and to handsome Paul, from your best friend Ester."

Slowly Maria folded the letter. How strange that Franca should have changed so radically. In a sense, she had achieved the exact opposite of what she wanted. When they had left for India, she had declared she wanted to 'get high', 'get out of it', and she had certainly done that, losing herself on the way. She had played with fire, to return to the starting point: work, routine and living at home with mum and dad. Maybe she was happy like that, Maria thought, with the same sad detachment she always felt when thinking of her.

She smiled at Ashok who was now lying on her crossed legs, happy and relaxed. He looked at her with those dark eyes enhanced by kajal and smiled back, showing his four teeth, two above and two below. She caressed his head and he closed his eyes. Ritu joined them, sitting as close as possible to her, and Maria stroked her back. The mountains in front of them were bathed in sunshine. She loved this place, she had loved it from the first day; it was full of peace. Shanti, Madam, shanti, she said to herself with a smile; local people said it all the time. She thought of Ester, in Venice, and of her family. She missed them. For everything there was a price to pay, but she'd see them at least once a year.

Paul came out onto the terrace and sat beside her. He observed Ashok dozing and patted Ritu on the head, then hugged Maria and buried his face in her hair. "I love your scent!" he said. "These children adore you. Good news from Italy?"
"Ester wrote about Franca. It seems that she's no longer the same, and has had two road accidents," she reported.
Paul mused, while stroking her back: "Unfortunately, this is the risk people run when they use certain drugs to excess; also, she may have had underlying problems that have flared up," he said. "I wonder what she took!"
Maria decided she'd chant with renewed determination for Franca's happiness. "Ester is putting money aside to come and visit us in the spring, with Enrico," she said.
Paul smiled: "That would be great. They'll love this place! Tell her we'll come back from Goa early April." He kissed Maria on her hair: "I've finished both articles; I need to stretch my legs and get down to some farming work. If you don't mind, I'll join Telsin in the fields. Later, I'll go and fetch water from the fountain."
She laughed, amused: "Great! You'll make all the women in the village very happy!"
"There's only one woman for me," he replied, grinning and putting on the traditional hat with the coloured stripes on the front. It suited him beautifully, with his blond curls. He bent down on his knees and kissed her again. "I love you!" he said, before going down the steep stairs. The hard work in the fields relaxed him. He liked the quiet company of Pushpa's husband and the other village men, and they were always happy when he joined them in the fields. Everyone liked him and he came home with the produce of the earth, of which he was very proud. Maria loved him more every day and he treated her as if she really was a Treasure Tower. She had finally let go of the insecurity of the past. She was a confident, loved woman, for the first time in her life.

She heard footsteps coming up the wooden staircase and Pushpa's smiling face appeared on the balcony. "Lakri?" she said, waving her hand in the air, as if to unscrew a light bulb. Shall we go and get firewood? She was smiling from ear to ear, with those white teeth and bright eyes.
"Baccha?" Maria said. And the baby?
"Mataji," replied Pushpa; grandmother will look after him.
At the sound of his mother's voice, Ashok began to fidget, looking at her with longing. Ritu ran to hug her and Pushpa stroked her with love. Then she picked up the little boy and kissed him all over, a few minutes of cuddles with her plump healthy child, before handing him over to his grandmother.
Granny came onto the porch, her aching legs crooked at the knees. She was dressed all in white, as was the custom for widows; she had aged a lot in those few months. She opened her arms, welcoming her grandson with her beautiful toothless smile, and kissed him profusely. With him, and followed by Ritu, she sat down cross-legged in front of the tandoori stove, where she was preparing dinner.

Holding on to the banister, they climbed down the stairs and Pushpa went to get the panniers, while Maria quickly gathered her long hair in a braid.
"Lara?" Your husband? Pushpa asked, as soon as she reappeared, with that movement of her hand, fingers up.
"Lara, kama kara, Telsin!" Her husband was working with Telsin.
"Tum, tike?" Pushpa asked, showing, as usual, concern for her.
"Ahan, Ji, tike. Dhanyavad." She was fine, thank you.
"Tum…?" Pushpa asked, miming a flow coming down from between her legs. Their cycle always came at the same time.
"Naih!" replied Maria. Hers hadn't started.
"Naih?" Pushpa said, looking at her, her eyes big with surprise. She stopped in the middle of the path. "Baccha?" she asked, a little boy? Then, leaning backwards, she mimed a huge penis in front of her.
Maria burst out laughing. "Naih!" she said, though she had been feeling 'different' the past couple of weeks. Jokingly, she pushed her hand on Pushpa's private parts and said: "Bacchee," a little girl.
They laughed out loud, happy and free. With this new possibility floating with them, they walked up the steep mountain side, Maria in her faithful jeans and a white t-shirt, Pushpa wrapped in the traditional grey blanket, a red scarf around her neck.

During the night a fierce wind had caused many branches to drop to the ground, making their job very easy. Pushpa stopped in a clearing to catch her breath, laid her pannier down and motioned to Maria to sit on the grass beside her, tapping the ground a couple of times with her hand. "Beto, beto, shanti!" she said.
Hot and sweaty, Maria removed her pannier and sat beside her, her heart pounding from the climb. Taking long deep breaths, she admired the Himalayan valley. She looked around; there was plenty of wood ready to be collected. "Bahut lakri hai!" she said. There's a lot of firewood.
"Ahan, bahut lakri hai!" Pushpa confirmed smiling, rocking her head from side to side, in that funny way. "Brahamanda acchah hai!" The Universe is good, she added.
Maria understood and nodded, smiling. "Tum acchah hai!" she said, touching Pushpa's arm with her index finger. You are good, great, nice, everything positive that the word 'acchah' could possibly mean.
Her local friend laughed, amused by Maria's Hindi, full of grammatical errors. She leaned toward her and playfully touched Maria's shoulder with hers. After a brief pause, she replied: "Tum bahut acchih hai... didi!" You are very good...  sister.

Smiling happily, they held each other's hand and turned their gaze back to the mountains covered in trees. The honey-coloured light of the late afternoon sparkled on the branches, home to hundreds of busy birds. Maria never tired of the vast, majestic landscape; it was an inexhaustible source of hues, constantly providing new ideas for her paintings. She immersed herself in the simple, genuine life that provided endless inspiration for the stories she had started to write. Never before had she felt so free, so happy and full of gratitude. Out of the corner of her eye she glanced at her friend's profile and smiled, savouring the cool breeze that blew through their hair, tied back in similar braids; Pushpa's black and shiny, Maria's brown and coppery. 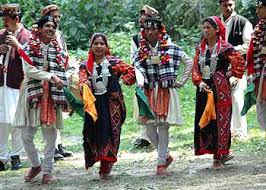 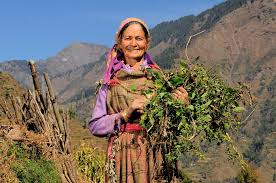 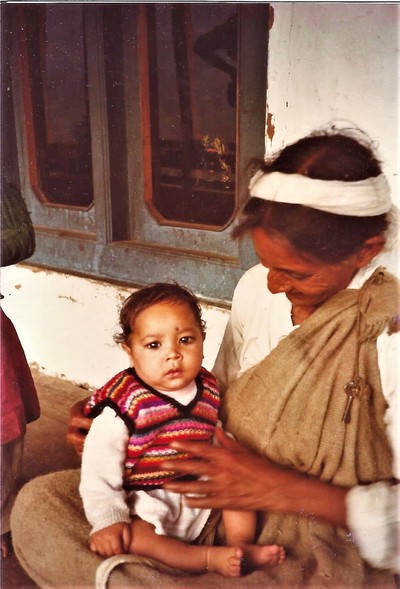 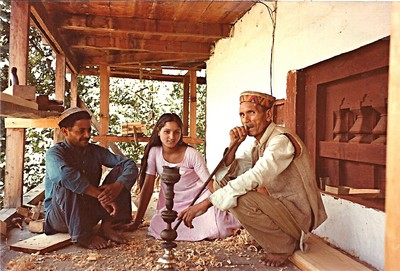 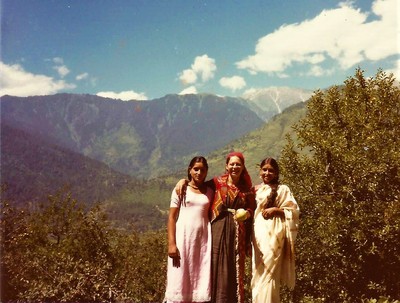 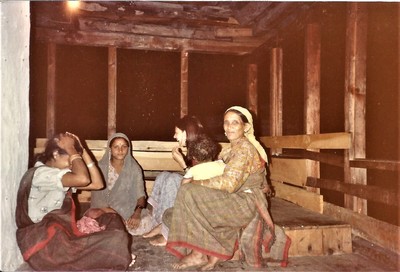 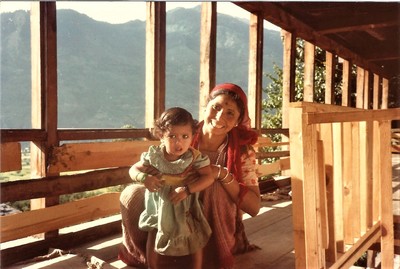 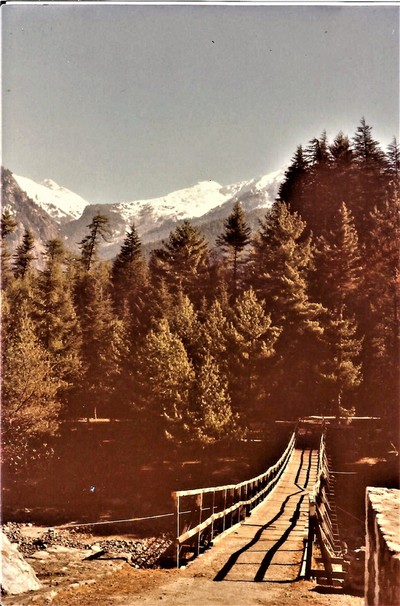 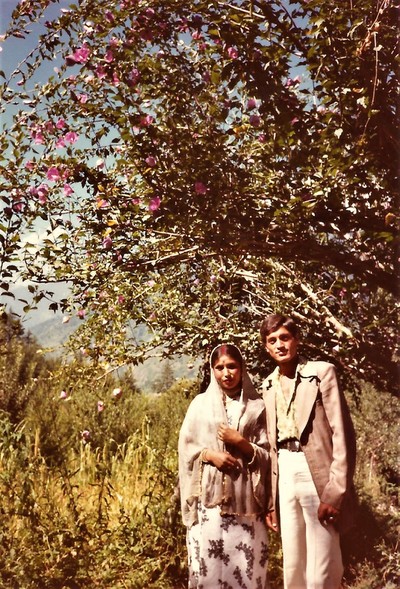 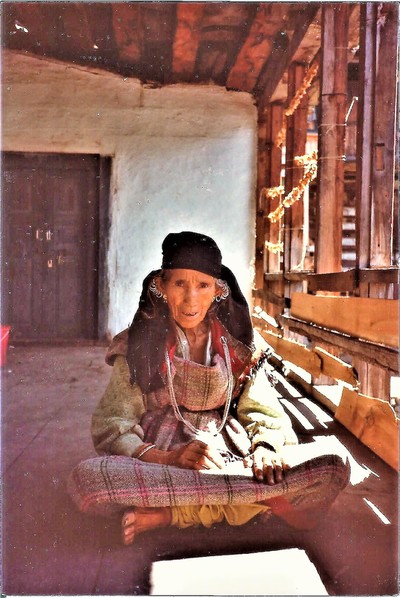 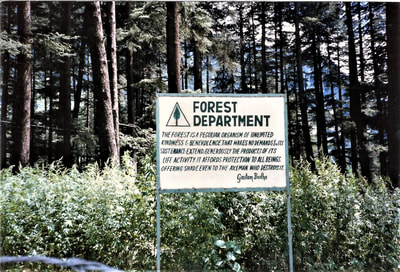 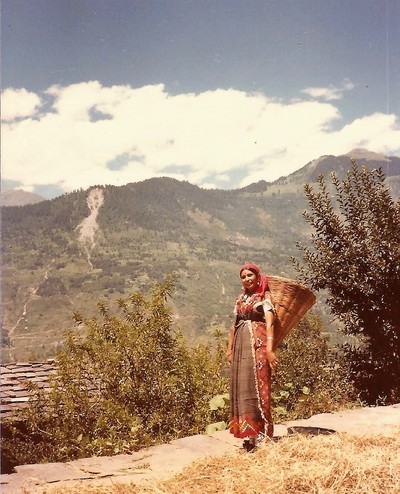 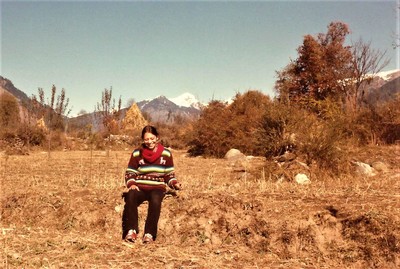 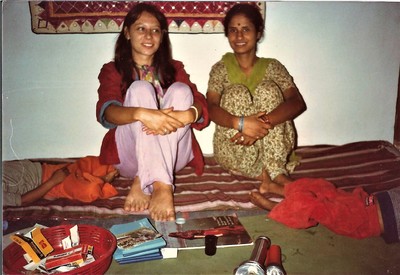 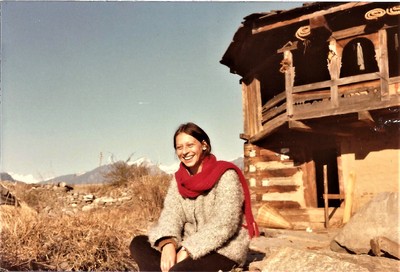 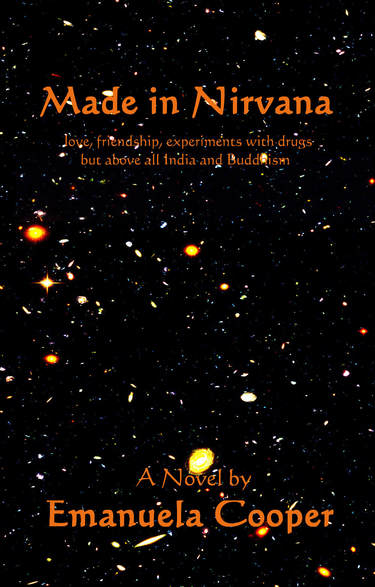 I hope you enjoyed reading Made in Nirvana and travelling with Maria. I'd love to know your impressions. Please, email me on: manucooper53@hotmail.com
Thank you for your time and for coming with me throughout this journey!
If you want to buy the hard copy or the kindle version of Made in Nirvana, please go to ´link to buy´on the top menu for the correct link for your country.